This is a Jedi Knight remake of the Unreal Tournament map, Space Noxx. This level has been recreated, not ripped or stolen. Best played with weapon mods such as SS3, GaS, or JKInstaGib. Also great with plain JK DM without Force.

*Note: This level is all 8-bit, but requires hardware acceleration to run without HOM errors. 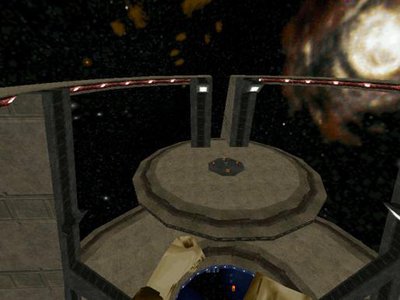 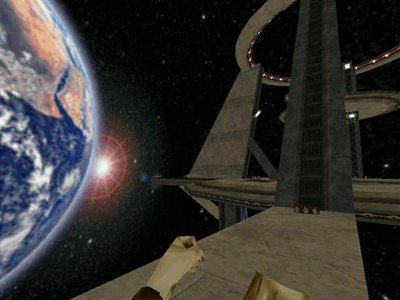 Emon
Posted: 2001-10-21 8:08 p.m.   Report Abuse Author's note: The use of Unreal Tournament textures (converted to 8-bit) in this level is entirely legal. Unreal Tournament textures were released for non-profitable public use.
Evil_Cartman
Posted: 2001-10-21 8:47 p.m.   Report Abuse I hate this level. Its a nice level in UT but its creation is totally flawed. The reason you need a 3d accelerator to view this level properly is because the entire architecture is made up of 3do's. The author apparently does not know how to make the "sector within a sector" effect.

The mats are taken from UT which shows me there was no attempt to make new textures. The hole in the center with the transparent mat is buggy. You can see the sky texture through it and it cuts up the transparency. The jump platforms were the only thing I liked.

If you want to see how flawed this level is... turn your 3d card off and walk around. The 3do's are either not aligned correctly or poorly made.

I don't like pissing on a level like this but the one thing I hate is unoriginality and this level has no originality at all.
dynasty
Posted: 2001-10-21 9:28 p.m.   Report Abuse Well, I believe I speak for Emon when I say that a "REMAKE" is not exactly intended to be a work of great "originality".

I find the representation to be quite good, and can simply ask WHY you would be turning off your hardware acceleration for any reason other than lack of any better complaints :p

Your "hate" for this level is spawned by your aggrevation with the authors methods, not by the level itself.

"Its a nice level in UT but its creation is totally flawed."

I have been playing games since childhood and have yet to see a perfect game/level. In a sense, every game/level is flawed in some respect.

"The author apparently does not know how to make the "sector within a sector" effect."

You assume too much. There are many methods that are used to create levels, all are flawed to an extent, in theory. Maybe he decided that it was ignorant to spend alot of time re-creating the architecture for a map when he could just make it into a 3do. Seems quite practical, the results are decent and the gameplay is as good as it would have been with any method.

"The mats are taken from UT which shows me there was no attempt to make new textures."

I've always thought that the best remakes were the ones that were actually remakes. When you don't use the original textures, you don't get the original feeling/atmosphere. It would be like re-creating The Edge from Quake 2 for Jedi Knight and using the Nar Shaddaa mats. Not only would it look ridiculous, but it wouldn't capture the feeling and wouldn't be an exact remake.

"The hole in the center with the transparent mat is buggy."

Agreed. I have a Voodoo 3 3000 AGP, which isn't exactly state of the art, but I would expect to be able to play anything using the Sith engine on it. The first time I entered the level and looked at that mat, JK crashed. After awhile, I was able to play the map and even look at the mat, but it looked very out of place.

"If you want to see how flawed this level is... turn your 3d card off and walk around. The 3do's are either not aligned correctly or poorly made."

I wouldn't say that they were poorly made, but the gaps are highly visible from the right angles.

"I don't like pissing on a level like this but the one thing I hate is unoriginality and this level has no originality at all."

There is nothing wrong with disliking a level because it's not original, but let's not assume that just because it isn't original, that it doesn't have good gameplay and is fun. That's what it's all about...fun. Fun creating the level, and fun for the players. All of this elitest Massassian stuff doesn't mean anything when it comes down to good old-fashioned, hardcore gameplay.

I realize the force field is buggy. But myself nor Uber(HOV) who was on a Voodoo 3 as well when we tested had no problems with it, except for the occasional HOM.

How can the 3dos not be aligned properly? It's all ONE 3do.

If this level isn't the EXACT PERFECT CONVERSION you expect, well I quite frankly do not care. If you wanna play the real thing, play it in UT. You cannot possible expect anyone to perfectly recreate a map from a state of the art game onto a 4 year old gaming engine.

Also, did I not mention that you NEEDED A 3-D CARD TO PLAY THIS LEVEL? Um, HELLO! I did my best recreating this map from UT, and im sorry if you cannot play this level, a conversion from a state of the art game on a 4 year old engine without 3-D acceleration. Why would you even bother to turn it off if you had it? The reason it's buggy without it is because of the invisible 3dos I had to place around the level, acting as duct tape since there were unknown collision problems. If you do not have a decent computer to play this, well that's not my fault.
Emon
Posted: 2001-10-22 2:43 p.m.   Report Abuse Also, this is the first level I have ever submitted. You do not have to flame me because I cannot do something perfectly. I did not expect this to come out perfect, and I never said it was.
A Big Fat CoW
Posted: 2001-10-22 5:00 p.m.   Report Abuse all one 3do? hmmm..... *downloads a delete and fly hacks* hehehehe....
Zer-0-
Posted: 2001-10-22 5:40 p.m.   Report Abuse Well said Reactor. I also must add this guy is like a dream, *Notice Newb's, this is not his FIRST LEVEL, it is his FIRST LEVEL RELEASED. See how much better it looks from the screen shots?*

Good job Emon, I wont D/L it cause I dont gotta 3D card now, accidently did the feet on the carpet thing, well, wont get into that, cause im kinda mad about it, but G/J

-Zer-0-
ExaR_KuN_KsD
Posted: 2001-10-22 6:23 p.m.   Report Abuse Excellent recreation of Space Noxx, not just as far as JK is concerned, but any game. As for the use of software mode with this level, I tried it and it was nowhere near a detriment on gameplay as people made it sound, the level is very playable with it on. Excellent work by the author. This level is a keeper.
SuperThunderer
Posted: 2001-10-22 6:55 p.m.   Report Abuse O_O Wow. You're good. That reminds me of a planetary orbital accelerator...hmmm... mass packet launcher.... 252nd DOWNLOAD! YEAH! Hey, if you want ideas for levels, ask me. My email's Thunderer@ffonline.com
"Those who are evil shall tremble at the sight of my mighty sword, for I am the purger of evil, I am...Thunderer."
Ozzarref
Posted: 2001-10-23 8:40 a.m.   Report Abuse Emon, I have to say...this is great! Just one thing though. There is a utility to take unreal .utm maps and export a selection to a JK .3do file, and visa versa. I know it works and I've converted many of my levels to Unreal using it. Just out of curiosity...did u take the easy way out? I really hope not...

Emon
Posted: 2001-10-23 3:15 p.m.   Report Abuse No, like I said it was NOT ripped. Ripping the level like that would be illegal. One way to tell is that the ring size-to-force field size is slighty out of proportion, and I the ring around the top is a bit different (I couldn't see the edges very well in UT), and some other stuff, like those dark little areas where the ammo sits isn't made of perfect polygons.
Ozzarref
Posted: 2001-10-23 3:47 p.m.   Report Abuse Hey man, I didn't mean to be offensive. I just found it pretty accurate. I give u alot of credit for re-making a great level for an ancient engine. Good job man.
Lt_Greywolf
Posted: 2001-10-24 5:36 a.m.   Report Abuse Ok first off Im giving the level a six... Nice use of textures in a level that was made for a totally different game. Also the fact that the station was one big 3do did semi hurt my framerate brought the score down a weee bit. Flow wise its a good level all though I thought the noxx level had a little less gravity... (no points taken off here though) As for the textures well... Its hard to rate textures that are stright from UT but they looked fairly good IMO... BTW note to everyone about that forcefield that is a animated mat from a 3do if you look thought out all JK's history transparent mats and 3do's dont work well together I think Emon did a good job of keeping the HOM down as well as he did...
Well I've said all I wanted to say Cya!
Emon
Posted: 2001-10-24 6:11 p.m.   Report Abuse Thank you for the comments. Ozz, yes I know you didn't mean to sound offense...and I didn't either ;D
Sith_UF_Ultima
Posted: 2001-10-25 8:14 a.m.   Report Abuse i gave this level a 10-it be sweet
and to all who hate it-maybe you should be quiet and go play your own crappy levels
all who like this:GOOD ON YA!
Hamhog999k
Posted: 2001-12-01 3:13 p.m.   Report Abuse I gives a ten. Kewl level. And anyone who flames this 'thing' should be shot. (Get it? 'thing' = '3do'! Lol). Anyways, I wanna see all you people out there make a level like this and create a 3do like this.

Remakes are by far in my opinion some of the most difficult things to do.

As previously stated, a remake isn't a remake unless its a near perfect remake. And that is very hard to do.

Anyone who has made 3do's knows that making things perfect is tough.
Tough because you ALWAYS want to get it closer and closer to the source material.