Lor San Keim is a Human whose birthplace was Coruscant. He had A happy childhood there until one-day Remnant forces came to the flat he was living in and took his parents away. By his 18th Birthday Liam (actual name) had been an orphan in the care of his grandfather for 5 years. Shortly after his 18th birthday his grandfather passed away and Liam was left with nothing. Liam was living on the streets of Coruscant for 9 months before he was spotted by a student at the Jedi academy on yavin 4, Shrii Gios a student on a mission on Coruscant saw that Liam needed help and took him back to the academy with her, Liam stayed there for 2 months, simply living in the same quarters as Shrii. One day however Liam suddenly was able to use the force (to date no one knows how or why this event occurred) and he was allowed to become a student at the academy, not just an occupant. Within a period of 3 months he had far surpassed Shrii and by 8 months he was to become Jedi Master Lor San Keim (Lor San uses duel lightsabers 1 Green and 1 Gold). Lor San decided to help Luke and Kyle to wipe out the remaining remnant forces, on his 3rd mission he learned of a Sith lord called Darth Saulis that was linked to capture of his parents, over the next year he and Shrii gathered as much information that they could about the mysterious Darth Saulis and the pair of them set of on a mission to defeat Saulis and learn the true fate of his parents. During this mission Lor San and Shrii found Saulis on the remote planet of Tatooine. The pair attempted to defeat Saulis, but before they could get to him his apprentice Sanguinus appeared. Lor San had no mind to give up however; he challenged Darth Saulis to a duel, Saulis agreed on condition that Sanguius and Shrii were to fight a duel as well. Lor San began to have second thoughts but Shrii accepted before he had time to warm her that it might not be a good idea. At first the duels went well for the pair but soon Shrii began to tire, her attacks were not strong enough to parry Sanguius' strikes and Sanguinus got the better of her and struck her down. Lor San saw this as he was dueling and was enraged; he used this rage to attack Saulis with new speed and strength. As Lor San gained the upper hand and it looked like he would win, Sanguinus joined the battle. Even with the use of two lightsabers Lor San knew that he couldn't beat two fully trained sith so in a desperate final attack he managed to fatally wound Darth Saulis and escape. Darth Saulis didn't die but he was rendered unable to fight again. Lor San escaped with Shrii's body and cremated it on her home planet of Pishrii, he never learned the fate of his parents. 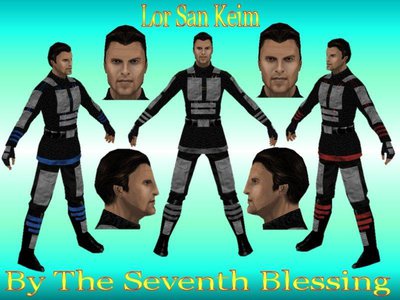 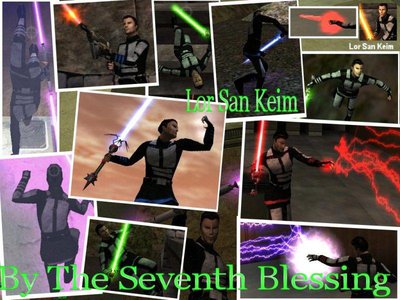 P.S. I love how you gave the skin a life story, makes it more personal somehow.
Corran2015
Posted: 2004-01-17 1:54 p.m.   Report Abuse I've read better written short stories but great job, its only an extra to a great skin. I like this skin because it offers something nice but not excessive or too novel. Its good and cool looking and it doesn't have 10000 people bound to use it just because the character had a cool part in the movie.
Third_Echlon
Posted: 2004-01-23 9:04 a.m.   Report Abuse Nice Job it looks awsome, and has a good story behind the character. Keep up the good work.
The Seventh Blessing
Posted: 2004-01-31 3:37 a.m.   Report Abuse thanks people
i apreciate the nice comments

(9/10 because nothing is perfect :p)
SpyderFreak
Posted: 2004-03-24 1:59 p.m.   Report Abuse Fantastic jod TSB! Awesome skin and cool story to go along with it. If you ever get into moding, you should try to make a new SP level (or two) with that story as the plot. I really like your skins I've seen (That other reborn one for JA was AWESOME!) and this one is just as good!