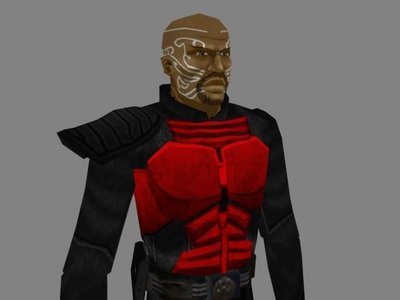 Another Bug Squashed - Brian @ 5:30 PM
Don't know if anyone cares, but when we edited an entry for a level, the download counter would get reset. That bug has now been fixed, sorry to any level authors that were affected.
MPG Updates - Brian @ 2:46 PM
Looking for some live JK action? Be sure to keep up with the happenings over at the Massassi Players Group. There have been a couple of levels added lately, so be sure to download them and start a game.
Levels + Misc Info - Brian @ 1:51 PM
Alright, I updated the levels script to start outputting the "recent levels" list on the main page. As you can see, some of the levels listed there aren't the most recent. Due to a bug in the script, the "date added" time was being updated each time a level entry was edited. This has been fixed, so as more levels are added, that list will correct itself.

Jedi Josh also brought to my attention the fact that the "last updated" line at the top wasn't correct anymore. That has also been fixed. Any other problems, please let me know.
New Jedi Knight Mod Review: Guyver Attack TC - Reviews @ 10:03 AM
The Massassi Temple Review Site has just posted a new review of Guyver Attack TC. The level was created by Guyver 1.

Vampire In Stores - Brian @ 8:35 AM
Non-JK, but good news nonetheless. In case you don't know the story, after Jedi Knight was released, a bunch of LEC employees left and started their own companies (some are at Nihilistic Software and some are at Infinite Machine). Anyway, Nihilistic has just released their first game, Vampire: The Masquerade - Redemption. It's a killer 3D role-playing game. I received my pre-order copy yesterday, and I must say, this game is amazing. Word is that it's selling like hotcakes, so if you are going to buy it, be sure to call your local software store before you make the trip.

For all the latest news and information, be sure to stop by my other project, PlanetVampire.
Dorkfiles Opens TC/Mod Library - blujay @ 5:19 AM
The Dorkfiles has opened their TC/Mod Library, where they catalog all the current TC's and mods in progress for JK and MotS and provide status information and an interest poll. So far it's looking great, so go have a look.

New COG: Energy Ribbon - Kedri @ 4:45 PM
Sven Solo sent in a COG script that takes the standard lightning event and extends it with some customizable variables like pulserate and sound. Some spiffy applications pop into my head with this one. It'll work in SP, MP and CTF, but only in Jedi Knight. Thanks to Sven for his submission.
New Jedi Knight Mod: Guyver Attack TC - Kedri @ 3:30 PM
File: Guyver Attack TC
Author: Guyver 1
Screenshots: Screenshot 1, Screenshot 2
Description: Ever seen or heard of the Guyver anime? Ever wanted to play as him? Well, now is your chance. In this mod you are able to use all the weapons Guyver uses. Even for gamers that don't know of Guyver this mod is worth a download. It has many new weapons, force powers, and items. Enjoy.
New Jedi Knight Mod: Darth Yun - Kedri @ 3:24 PM
File: Darth Yun
Author: Seijin
Screenshots: Screenshot 1, Screenshot 2
Description: This Darth Yun skin includes a Double-Bladed black Sith Lightsaber and a grappling hook. Darth Yun is also able to flip and amputate the heads of stormtroopers. Last, but not least, you are able to change from regular Darth Yun to a Darth Yun in Sith Robes.
New Jedi Knight Multiplayer Level: Lost Base - Kedri @ 3:19 PM
File: Lost Base
Author: MW_BountyHunter
Screenshots: Screenshot 1, Screenshot 2
Description: This is a large level set on a base over a volcano, with three bridges going over the lava. This level is great for NF or FF sabers, 2-4 players. It also has many underground pathways. Having three briges going over the lava at three different heights and angles is a fun scenario for saber-dueling; falling down is a constant risk. A challenge all around.
New Jedi Knight Multiplayer Level: Ancient Sith Arena - Kedri @ 3:04 PM
File: Ancient Sith Arena
Author: RSW_CrimsonTide
Screenshots: Screenshot 1, Screenshot 2
Description: A small multiplayer level based upon the stories of the ancient Sith race that dwelt on Ziost. It is meant for lightsaber duels, but is full of guns for the gunning type. Enjoy.
New Jedi Knight Multiplayer Level: Sniper Fort - Kedri @ 2:49 PM
File: Sniper Fort
Author: Rjmig88
Screenshots: Screenshot 1, Screenshot 2
Description: A fort that is controlled by snipers. Fast, furious gameplay in this level. Enjoy...
Improved Saber Colors... Improved - Kedri @ 1:56 PM
There was a major error with the Improved Saber Colours JK Mod. Essentially, the sabers were placed in the 3DO/MAT section instead of the MAT/ section, doing nothing to improve the sabers. Jkguy_009 has sent in an updated version of the mod, assuring everyone that this one does indeed work. The update replaces the current file.
New Jedi Knight Multiplayer Level Review: The Temple of the Fire Rain - Reviews @ 7:53 AM
The Massassi Temple Review Site has just posted a new review of The Temple of the Fire Rain. The level was created by Xaem.
Zoom Scope Tutorial at Millennium - blujay @ 2:39 AM
Hideki has posted a new tutorial on Millennium showing you how to create a zoom scope for use in your mods. So, all you mod makers, be sure to check it out!
« oldest ‹ older
Page 180 of 181
newer › newest »